It must be lonely at the top when you publicly make a call for peaceful protesting a week ago and find yourself being attacked by rabid Democrats but President Trump appears used to it.

Earlier Wednesday in a national address released by the White House, President Trump decried political violence and again urged Americans of all political persuasions to refrain from violence.

This as his call at a rally before hundreds of thousands of Americans attending a DC rally for voting integrity  a week earlier led to a Nancy Pelosi directed impeachment vote today with zero due process, zero hearings and a never-before-seen in US history same-day afternoon impeachment.

President Trump had remarked to the huge throng of supporters prior to the controversial certification vote on Capitol Hill, that those in attendance join to “peacefully and patriotically let your voices be heard.”

But even before President Trump’s remarks were finished, the timeline of events shows a group of protestors had assembled at the Capitol Building intent on getting inside before the 1:00 pm proceedings. Democrats had closed the public gallery claiming the Chinese Communist Party Virus as the necessity to do so.

Antifa infiltrators were confirmed in attendance and they led the front of the protest dressed in their fascistic black bloc uniforms while others blended in with at least some succeeding in convincing local security to open the gates. Later, they instigated the protesters to enter the building with some breaking glass although heckled as Antifa and stopped at least once by the crowd before the doors would oddly be opened by security police inside.

President Trump urged peace and “law and order” from the White House; a common theme he’s stated numerous times as Democrats encouraged violent protests often leading to assault, looting of businesses and arson with dozens of murders across the country last summer.
The Democrats went ahead with a political plan to try and prevent President Trump from holding office in the future even in the face of volumes of growing evidence of election fraud in the battleground states.
The House voted to approve a second impeachment with not a single public hearing in what even Democrat constitutional experts Dr. Jonathan Turley and Alan Dershowitz describe as destructive to the US Constitution.
While the US Senate won’t be taking up the matter, NY Senator Chuck Schumer (D) is salivating at the prospect of conducting an impeachment trial even with President Trump being out of office, cited once again by Constitutional experts as another illegal act.
Welcome to 2021 and the Fascist Left. Their cancel culture agenda is already dousing the First Amendment rights of Americans and in the pipeline they’re working on “domestic terrorists” legislation to make dissent a criminal act.
Here’s a sampling below of some of the actual remarks pointing to demonstrable insurrection and sedition to go with the four years of repeated coup efforts.
One coup effort failed last year when a sham impeachment against President Trump was rolled out for crimes in Ukraine committed by Joe “Ukraine extortion” Biden. The Biden family has been under federal investigation for well over a year based on the surrender of a laptop owned by Biden bag man Hunter who collected millions from a Russian oligarch connected to Putin, an energy concern in Ukraine and many millions more from Communist China.
Don’t forget it’s 10% (or more) for the Big Guy, Joe Biden that must be kicked up. 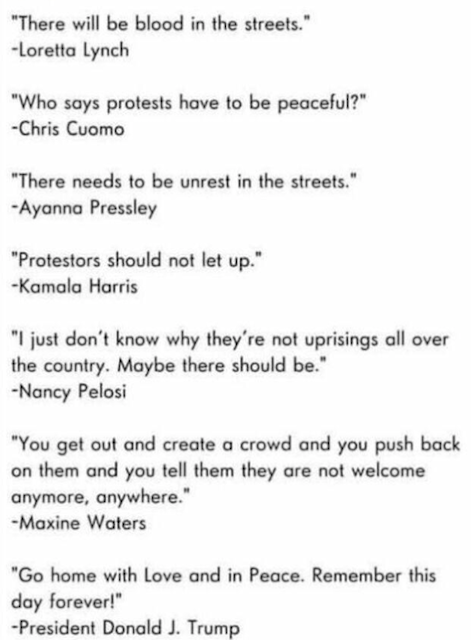 Talking Ed Note: If you’ve asked yourself how the Soviets and Nazis were able to get away with mounting human rights abuses, you don’t need to read a history book. It’s happening right before our eyes.
Where’s the evidence of any “insurrection?” As in the prior sham impeachment, there is no actual evidence of anything alleged. It’s all hatred and a blatant power grab to go with the blatant election fraud in Election Theft 2020.
And the Leftist intelligentsia cheers it all on.