Stop the Steal! – Arizona is back!

The premature call for Arizona last night is blowing up in more than a few faces.

A substantial number of votes were not counted and the result is Fox News which by my sources was encouraged to make the quick call last night has backfired. The NY Times is caught with egg on its face too. Both have acted as anti-Trump players during the election.

Word out of Arizona is President Trump was winning the votes coming in at a substantial clip and is anticipated seeing a five-figure victory when all those votes are tabulated.

This is in contrast the vote manufacturing that’s been going on and hasn’t stopped in other states.

The end result is the fight to check the massive voter fraud operation in Philadelphia is continuing and recounts in Wisconsin and Michigan can be expected.

Meanwhile, the Biden campaign is attempting to declare him the winner later today. Good luck with that.

BREAKING: 2:30 A lawsuit announced by Bill Stepien, Trump Campaign Manager is filed in Michigan to stop the steal: 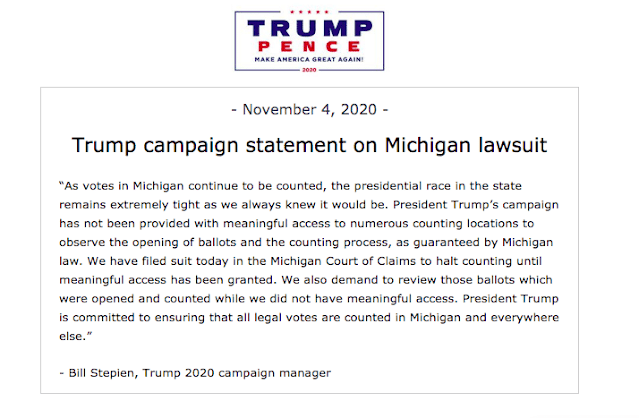 President Trump will hold a press conference at 3:30 PM.

I optimistic that President @realDonaldTrump will win AZ when all legal ballots are counted.

I’ve gone through this same experience in our state before. I was down on election night, & by the end of the week, I won when all legal ballots were counted.