Councilwoman Tiffanie Fisher: ‘The scoop on the Hoboken e-Scooters pilot’

Dear friends and neighbors:
It has been both a short and long 48 hours (as of this writing).  By now I am sure all of you have had at least one direct experience with our new E-Scooters – whether witnessing a safety breach or riding one or both.  Here is just one example of the many that I witnessed myself over the last two days of people running straight through stop signs (click to watch the short video): 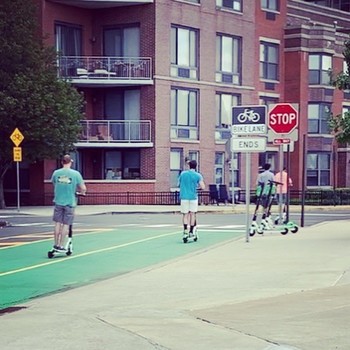 The volume of emails, calls and messages I have received has been exceptional given the short duration.  Hoboken PD has indicted they received over 1,000 emails to traffic@hobokepd.org in the first day.  Like those I received, the majority, but not all, are from people who are concerned, against, opposed, and/or want to see the E-Scooters thrown in the river.  And I would say that I personally fell into that camp as well.  A few have told me they are fun or cool.  Truth be told, I have not yet ridden one mainly because I lack confidence in my own abilities to stay upright on one, but I will give it the ole college try soon.
I am not writing to tell you what you already know.  That the rollout was terrible, lacking the education and enforcement plans and a commitment to safety that had been promised to the City Council when we voted 8-1 on the PILOT (for clarity – I voted ‘Yes’ only after I introduced and we discussed the topics of education and enforcement and we received the promises from the administration and HPD). Or that it seems like everyone in town lost their manners, marbles and respect for their neighbors in the last two days with these EScooters – whether ignoring stop signs and traffic lights, riding on sidewalks (illegal) and the wrong way on one way streets (always illegal), letting their teens have their sign-in and riding through Church Square Park (minimum age is 18, riding in parks is illegal), or letting their six year old join them on the scooter without a helmet (or even with one! Illegal!) and then just leaving scooters in the middle of sidewalks and directly in front of entrances to buildings.  Seriously… WHAT THE HECK HAPPENED?!?!?!?!? 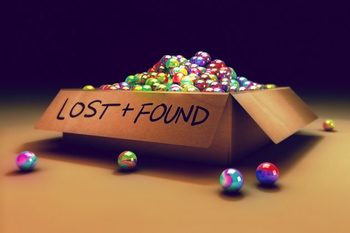 Day one was ridiculous but behaviors seemed to improve some on day two – I saw plenty of people riding safely, still a minority though.   And we learned more.  We learned that there were 2,500 rides on day one by 1,700 people that traveled over 2,700 miles.  That is a lot given these were only on 250 scooters (these stats just for the Lime E-Scooters).  That means people seem to like riding them.
We also learned that most people still don’t know what the rules are because their only way of knowing was if they happened to pass by the Lime table near Pier A, read the signs on the Lime scooter itself, or read the city’s informative nixle alert/email (that didn’t go out until the end of the first day of the pilot).  So we confirmed what we already knew which was that we need education and enforcement for this to have any chance at success.
But I actually learned the most in my 40 minute conversation with Shari Shapiro of Lime yesterday afternoon and also reading the state legislation for the first time.  She called to ask me if she could address any questions or concerns and she got an earful from me.  But to her credit, she was patient, listened and provided a lot of information that I wasn’t previously aware of that I think is helpful.
The conversation started with me asking about how Lime can make sure our youth cannot access the scooters.  We ended with a long list of suggestions and recommendations on what Lime can and should do as quickly as possible to meet the needs of Hoboken, which may be different than other communities they serve.  Here is a summary of some of what we discussed: 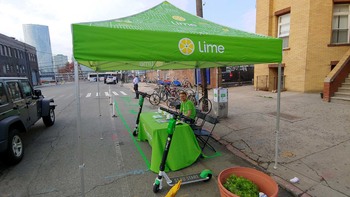 “As you know, the Hoboken program is a pilot. To make scooters a permanent option here, we need you to ride respectfully, following all the rules of the road, and paying special attention to these priorities:
Our staff is here to answer any questions:
Tuesday-Friday, May 28 @ 14th Ferry Terminal, Saturday, June 1 @ Pier A
For any questions, comments or concerns, please reach out to our team directly by emailing support@li.me, calling 1-888-LIME-345 or texting 1-888-546-3345″ 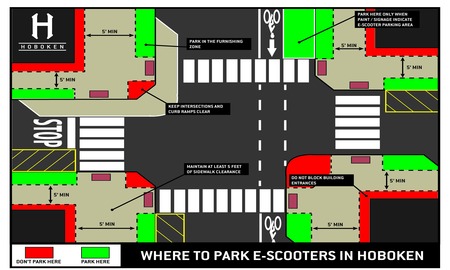 Definitely not like these that I came home to on Day One (on left) and Day Two: 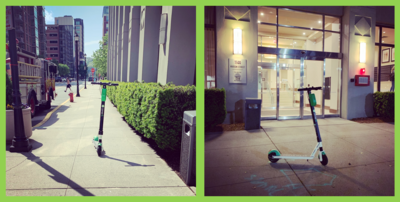 The $$$$ of this…a few have asked me what Hoboken is making on this PILOT.  My view – not enough.  Under the Lime contract, Hoboken makes only an upfront fee of $50/EScooter.  So about $12,500.  But how much is EScooter making?  Of course we don’t know definitively, but let’s calculate what we think the math could be based upon Day One usage and fees (published in HMAG article on first 24 hours:

Per Hoboken’s website, the cost to ride a Lime E-Scooter are as follows:
So per above
Total gross revenues Lime made on Day One (which was really more like a half day) = $8,080.75 which means they have already covered the costs of the permit fees to Hoboken by Day Two.  And applying Day One as the average for the entire 6 month PILOT they would make almost $1,500,000.  And this assumes that Day One on a Monday with no advanced warning is equal to the busiest weekend days of the summer meaning the number should only be higher.  And we only get $12,500 with 100% of the safety and enforcement burden. Does that sound like a smart deal for Hoboken?
For many reasons I share the frustrations of most, but not all, of you and I am more skeptical than optimisitc about the success of E-Scooters in Hoboken.  We have a council meeting on June 5th and I think we need to see changed behavior, increased education and an enforcement plan from HPD that makes safety the only priority and that we can all believe in before that meeting.  The stakes are too high. That said, if we want to see the program succeed then it is UP TO YOU!  You know the metaphor “one bad apple…”.
I will be working with my City Council colleagues and the administration to update our policies to ensure they reflect zero tolerance for unsafe conditions and will also seek to improve the financial terms so that the cost benefit balance is more favorable to Hoboken than it currently is now.
If anyone can do this, Hoboken can.  It is our program to lose.

This situation is fluid.  Share any and all pictures and videos with Hoboken PD at traffic@hobokenpd.org (cc me if you can so I can see to…).  Also share with me any ideas, suggestions or successes too.  And please forward this to everyone as a way to help educate and inform our community on this important issue.  And as always, feel free to reach out via email, text or phone (201-208-1674) about this or anything else important to you.