Dear friends and neighbors –
I have received several emails about the new 5G poles sprouting up around town and requests that I fight against them as strongly as I have fought against the proposed Monarch project over the years.  First and foremost, I will always fight for your quality of life issues, and this one is no different.  However, the parameters for which we could make a real difference here are significantly limited by federal law.  I can tell you that I, along with my City Council colleagues and the administration, have been trying to make these work as best as possible in Hoboken.
When we were first presented with the contract for Verizon to install these poles over a year ago across Hoboken, I, as Chair of the Finance and Infrastructure subcommittee, insisted that we understand what our rights were to stop these from being installed.  From both an aesthetic standpoint as well as a health one.  What our legal counsel advised us, and has since re-confirmed, is that the federal law – the Telecommunications Act of 1996 – effectively states that utility companies have the right to provide wireless services and that local law cannot stop them from installing them in public right of ways.  And that so long as any wireless installations comply with FCC regulatory standards:
“No State or local government or instrumentality thereof may regulate the placement, construction, and modification of personal wireless service facilities on the basis of the environmental effects of radio frequency emissions”.
Yes, the language is that direct and probably reflects the impact of lobbyists for the wireless industry.
So in a nutshell, our hands were completely tied in terms of our ability to stop Verizon (in this instance) from installing cell towers.  That being said, what the administration and my subcommittee (Councilmembers Giattino, Russo, and Jabbour) did was work with Verizon to make sure that (a) we understood the health considerations, (b) they used as many poles as possible that were already installed and collocated with PSEG poles (not a lot), (c) they locate the poles in places that were least intrusive and most equitable to residents (property lines vs. in front of windows, on corners, near-commercial properties, etc.), (d) they notice (now) residents within 200ft of a proposed installation, and (e) they establish a central point of information where people could go to find out information about the project – improveyourwireless.com/hoboken/.  None of these Verizon was required to do.  I, as well as Councilman Cunningham, personally asked the City to circulate a Nixle alert with information about this project multiple times but they never did.  We are told the City will be adding this to their website but as of yet, I have not seen it.
We met with Verizon a number of times on this project and I actually walked the entire city with them and members of the administration to see most, but not all, of the sites.  Verizon’s locations were based on optimizing radio frequency/cellular service within Hoboken.  And within what was often about a 25ft diameter of a proposed site, we tried to guide to the least intrusive location.  To be clear – we didn’t get to say “move it across the street” or “down a block” or “remove altogether”.  What we were able to do is look at the surrounding landscape and try to make it be as equitable and least intrusive as possible within the location range presented.
In terms of health and safety, we recently had a presentation from a specialist (a Physicist) who walked my subcommittee and members of the administration through considerations when it comes to radiation emitting from the 5G boxes.  I am in no way pretending to be the expert, but just a messenger of what we learned.  In its simplicity, there are two kinds of radiation – the kind that change the makeup of cells (ionizing) and the kind that just shakes them up and ultimately heats them (non-ionizing).  The former includes things like x-rays, UV rays and nuclear radiation.  The research is pretty clear on the damage this form of radiation can make.  The latter includes things like microwaves, radio waves and even light waves from everyday lighting in your home.  Here the research is still evolving.
These are two infographics that I found that reflect what was explained to us, where 5g fits into it all and other common sources of radio frequency radiation: 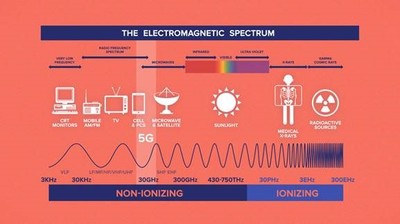 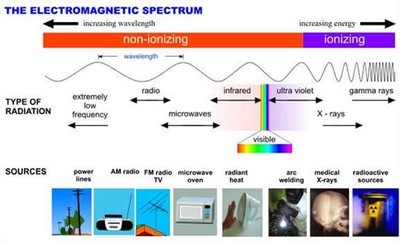 The physicist told us that it has not been proven that non-ionizing causes harm at the regulatory levels on emissions imposed by the FCC.  And if there were any it would only be from prolonged and direct exposure to the source and at levels that significantly exceed the regulatory levels.   That said, after reading countless articles, I think the prevailing view is that current research supports this, but more needs to be done as it relates to 5G because it is a new technology.  It seems too that it is not just the new poles that pose the risk, but it is as much, if not more, our cell service that emits from our phones that we all use and rely upon daily.  As a matter of fact, it is improving this service for Hoboken residents that is at the heart of this technology and these new poles.
I have read many articles but I personally found this article in CNET from June to be helpful:  5G Phones And Your Health – What you Need to Know.  Seems more balanced and informative and less biased than many other articles.
In terms of the aesthetic and daily quality of life concerns – here I will refer to it as the “sidewalk clutter” issue – I am always fighting to have less on our sidewalks and if we have to add any, making sure it works for Hoboken.  Even these 5g poles – originally the administration agreed to silver poles across the city.  But when we walked the city and realized that 95% of our poles were wood, we shifted to having wood poles to make them fit better in our streetscape.  After Councilman Doyle highlighted some environmental concerns with the wood poles, we moved to fiberglass ones that were more environmentally friendly and sturdier, but still of similar color to the wood ones.
Other times I have fought against sidewalk clutter:
Have I voted in favor of some adds to our sidewalk?  Yes, I have supported expanding sidewalk café legislation and I have supported a few more bike-share docking stations to be installed – both of which generally received community-wide support.  I was also the one responsible for having the bases restored and re-installed at the intersection of 11th street and Washington.  The project scope originally saw the baseball references being removed altogether.

So whether as big as Monarch or as small as 2nd base, I will advocate for your quality of life.  As it relates to these darn 5G poles, I personally wish I could say that we could remove all the poles but we can’t.  As of right now I think the best we can do is ensure a good relationship with the wireless companies so that we can get the best possible outcome given the circumstances.  Effectively this is a real estate grab and the federal laws support it.  ATT are already in Hoboken looking to find their own new locations.  And the City should be more transparent about this project that touches so many of us.  You can count on me to do what I can – always – to make sure Hoboken’s interests are best represented in all cases.
As always, please forward to anyone you think may be interested in this.  And feel free to email me at hoboken2nd@gmail.com or call me at 201/208-1674 to discuss what you have read or anything else that is important to you.  If you are interested in supporting my campaign for re-election you can do so ONLINE HERE.  Thank you again for this amazing opportunity to serve you and for your support.  I will continue to work hard, every day, to earn your vote on November 5th.