Councilman Peter Cunningham weighs in on the aftermath

Here’s comments from Peter Cunningham who posted a note originally Sunday about the parade on Facebook:

It’s too bad in a way that so many people love Hoboken and it’s bar scene, but are not mature enough to behave like adults.  That is respecting public and private property, our public safety officials, other residents, visitors as well as themselves.  How we would love to spread that economic impact around to the benefit of all, and not just the few.  In the end, it had just become too big for Hoboken to handle.  And that’s why so many other towns that did have a problem moved their parades to Sunday.

So the parade will continue, but on a Wednesday.  At this point, I know I have one phone call to return regarding the events of Saturday.  However please, if there are any other comments or concern, let me know.  Thanks, Peter
=============
I just returned from Houston late last night, however, have been collaborating with Mayor on St. Patrick’s Day changes since Monday.  Thoughts from cancelling altogether to other days of the week were all on the table.  A Wednesday helps preserve the parade celebrating Irish American heritage while maintaining civility in Hoboken.
Peter Cunningham
cunninghamforhoboken@gmail.com 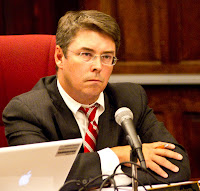