In a remarkable reversal of fortune, former VP Joe Biden has come back from almost dead to take a small lead after the Democrat Party Super Tuesday election.

He currently has 60 delegates more than Senator Bernie Sanders with several hundred delegates to be finalized among the candidates on the West Coast.

According to the NY Times delegate counter, Biden popped into the lead taking many of the eastern states while Sander’s fortunes rose in a mano a mano race in Texas with a near delegate split and victories in Colorado and Utah with the biggest prize yet to be tallied: California.

1991 delegates are needed to win the Democratic Party nomination. 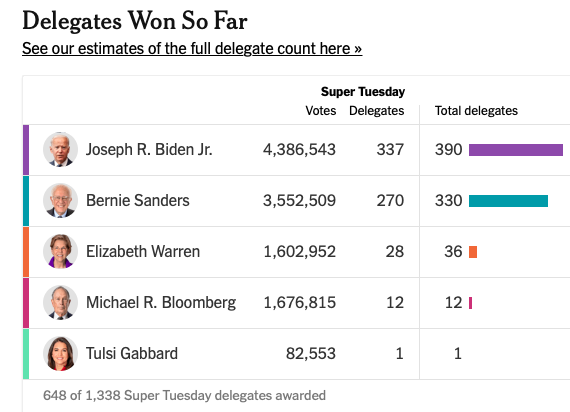 Among the storylines emerging is Mike Bloomberg, the former NYC mayor who is setting up to be the biggest bust in US political history. After injecting himself late into the Democrat Party race courtesy of some late rule changes, he’s dropped approximately $700 million of his $56 billion fortune seeking the party presidential nomination.
Of greater importance awaiting the final tallies is Senator Elizabeth Warren. While her prospects were dim entering Super Tuesday, those competitors down the list with her magically withdrew mere hours before the polls opened.
Unlike Senator Amy Klobuchar and former Mayor Pete Buttigieg who were down the delegate ladder and would exit and endorse Joe Biden, Warren stayed in siphoning votes from the left and away from Bernie Sanders.
With the presidential race close between Biden and Sanders, late last night the Warren campaign sent out a fundraising letter indicating she intends to keep performing in that role.
Trending number one on Twitter politics this am: “RiggedPrimary.”
President Trump who saw huge turnout against nominal opposition, weighed in with a tweet this morning:

The Democrat establishment came together and crushed Bernie Sanders, AGAIN! Even the fact that Elizabeth Warren stayed in the race was devastating to Bernie and allowed Sleepy Joe to unthinkably win Massachusetts. It was a perfect storm, with many good states remaining for Joe!

The next primary date is March 10th and includes the states of Michigan, Idaho, Mississippi, Missouri and Washington.