Jen Giattino: ‘I stood up for Ravi’

Lots of people filled up the Steven Debaun Auditorium tonight to hear the six mayoral candidates.

City Council President Jen Giattino presented the most cogent response during the night in addressing the partisan hatchet job mailer directed against her by Ravi Bhalla assaulting Hoboken mailboxes everywhere. 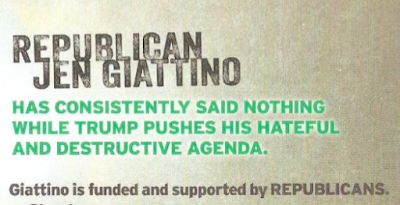 A question was asked what is the most ridiculous idea raised by your opponent during the election? While some candidates criticized the Mike DeFusco floating pool i n the Hudson as ludicrous or being rid of cars, Giattino made one simple statement about an attack mailer directed at her by Ravi Bhalla:

“I have stood up for everyone including Ravi.”
– Jen Giattino

It was part of her answer pointing to a verbal attack made on Ravi previously and she had defended him and thrown the offender out of a council meeting. Ravi Bhalla who Giattino has called a friend took the air out of his poison pill hate mailer with that one short statement about his cynical and partisan mailer.

Since the Ravi Bhalla hate mailer showed up, it’s been a non-stop backlash at MSV of mostly Democrats upset with the clearly desperate attempt to nationalize Hoboken’s non-partisan municipal election.

It’s an utter fabrication saying “Giattino is funded and supported by Republicans.”

Jen Giattino has the highest support of any of the candidates running for mayor by Hoboken residents. She literally has hundreds of residents who have contributed to her campaign, with the highest percentage of all candidates in the ballpark of 90% who live here.

Most of Jen Giattino’s support being elected twice to the City Council and in this mayoral run comes from Democrats.

Ravi Bhalla has stepped into the wading pool of going negative and decided he prefers to go all out and sink into the sewer below sea level. Sadly, this is the final cynical action destroying the remains of the Hoboken Reform Movement. The hyper partisanship of Ravi Bhalla along with the backroom deal he cut with Dawn Zimmer earlier this year leaves Hoboken Reform in ashes.

The use of the term “hate” as a catch all when people decline to agree with your policies is reaching epidemic proportions nationally. Now it’s being used here in Hoboken in a desperate bid to defeat what the Bhalla campaign backers claim is a candidate who is in last (fourth) place.

In devoting a costly mailer at this point in the Hoboken mayor’s race, the Bhalla campaign merely confirms what MSV has stated for weeks. Jen Giattino is surging and went to the top of the heap in Bhalla’s own poll.

You don’t blow all this money late in a race in order to stop a candidate who is no threat. It’s the desperate bid of a cynical campaign which has already destroyed the big tent of the Hoboken Reform Movement. Now, they’ve set their eyes on shredding Hoboken’s non-partisan mayoral election.

Ravi Bhalla wants the Hoboken voters to back him as he tries to leverage Hoboken to move up the ladder in the Democratic Party.

Talking Ed Note: Once again MSV can confirm this personal attack mailer against Jen Giattino is the latest in a series Ravi Bhalla sends to only Democrats.

All Libertarians, Republicans and Independents are second class citizens. On behalf of all the people who Ravi Bhalla wishes to put into a Hoboken caste system, thanks. How swell.