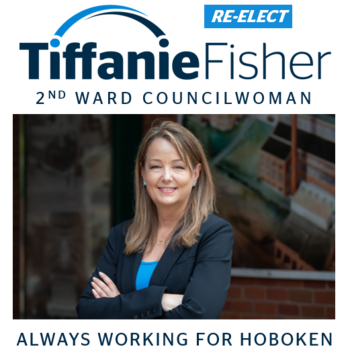 Dear friends and neighbors,
Hope you had a wonderful summer and are settling in for back-to-school, back-to-work, and/or back-to-home! It always amazes me how the weather often tells us it is time to return.  Before I jump into the main topic – Pedestrian Safety Initiatives – I wanted to touch on what I refer to as “Campaign Season” which starts tomorrow – and it is a season – continuing 9 weeks exactly to Election Day which this year is Tuesday, November 5th.   What this means for my newsletters is that they will often include campaign-related information along with the same community information I always provide.  For me to continue engaging with, informing and advocating for you, I need to be re-elected!  So thank you in advance for your support, your patience, and your input along this campaign journey.
But for today, the unofficial last day of summer, let’s talk Pedestrian Safety, Intersection and Traffic Initiatives you are coming home to.  This is mainly an update to my 5/20 email – 2nd Ward Pedestrian Safety Improvements Coming to You!  and also includes some homework for you at the end.
2ND WARD HUDSON COUNTY ROADS AND INTERSECTIONS 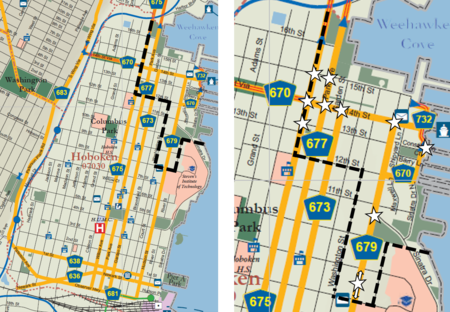 VISION ZERO
The administration Mayor finally announced the kick-off of Vision Zero this week.  I am told it was delayed because of other things going on in HPU.  It seems odd that it was also announced during the slowest week of the summer and that most of the City Council was not invited to attend.  I digress.  But there is a Task Force and the City Council will be voting on Wednesday for a $100K contract for a consultant who will help us with this important project.  I will be voting yes on the contract… because I believe we need a formal process and an independent voice to guide us and introduce us to best practices we can use to create what I will call a Culture of Safety in Hoboken that is currently missing.
But…I recently became aware that the City did something that looks a lot like Vision Zero in 2010 with the result being this 69 page City of Hoboken Bicycle & Pedestrian Plan that included 163 recommendations.  Most of which were not implemented.  So for another $100K I will ask that the new Vision Zero consultant refer to this prior plan and then will demand that it work with the administration to actually implement the recommendations.
For my 15th Street neighbors, you may be entertained (may be the wrong word) to know that 15th Street in the 2010 B&P Plan was identified as a top 4 “location identified by stakeholders and the public as priorities for bicycle and pedestrians improvements within the City” with the main issue identified as speeding.  You can scroll to pages 62 and 63 to see the recommendations – none of which were implemented in 9 years.
AMERICAN LEGION & VINNY AND COLE
In my 5/20 email, I talked about the new homes for homeless veterans we were building and Hoboken’s treasure, WWII Veteran Vinny Wassman.  Quick updates on both – I toured the new apartments and they are amazing – 3 one bedrooms and 3 studios that are in process of being furnished for their first occupancy in a couple of weeks. The City Council will be voting on a resolution on Wednesday encouraging the City to support using the adjacent city-owned land to build another adjoining 8 homes.  I plan to vote yes. 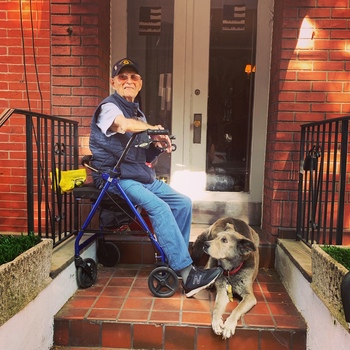 A less happy update on Vinny – he has watched the health of his best friend and companion Cole deteriorate over the past two months.  Yesterday he gave the ultimate gift to his 13 year old friend of letting him pass peacefully. Vinny is resolved in his decision but if you know him and/or knew Cole you know he is heartbroken at the same time.  Feel free to stop by and say hello and bring your own best friends along.  He has a huge heart for animals.  I will be bringing my rabbits by this week to meet him.
HOMEWORK
There were a number of changes that were and will be made to intersections across the 2nd Ward.  Please check that they were in fact done or let me know if they haven’t yet.  I will keep following up to ensure they will.  Also, if there are any other intersections or roads that you believe need to be considered, please let me know.  One in particular is 12th and Shipyard and I can tell you I have not yet discussed this one at any length but wukk.  And, if you are thankful for any of the changes made, let me know and I will pass them along to all the people involved.

Thank you to all of you who sent me such thoughtful emails in response to my 8/22 Calling Your Councilperson (me!) email.  I still owe some of you responses that I am working on but I am very much appreciative of your kind words.  And, I also appreciate all of you who have called since on topics important to you.  As I said in that email, you can call me for any reason, any time.  I am always working for Hoboken and for you.
As always, please forward to anyone you think may be interested in this.  And feel free to email me at hoboken2nd@gmail.com or call me at 201/208-1674 to discuss what you have read or anything else that is important to you.