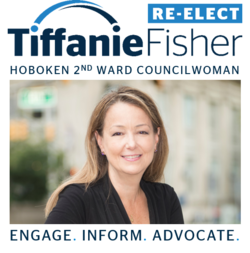 Dear friends and neighbors –
This week the discussion on the future of E-Scooters in Hoboken came to a head when one of our neighbors was pushing her 3 month old in a stroller on a sidewalk near 8th and Clinton and was hit by an Ojo E-Scooter driven by a teen.  Thankfully, she had no serious physical injuries other than a bruised leg and the baby was ok.  It goes without saying that this paints the worst picture (with the best possible outcome) that we all fear.   Although mom and baby are physically ok thankfully, the entire family is still dealing with the aftershock and the many “what ifs.”  In response to this accident, Mayor Bhalla announced first on Twitter that he was terminating the contract with Ojo.  Although I think there is more and different that needs to be done, I applauded this decision because we needed a bold move to happen.
IMPORTANT WEDNESDAY VOTE ON PARK AND WATERFRONT WALKWAY BAN
Before I continue with more EScooter updates below, I would like to invite you to the City Council meeting on Wednesday night at 7pm at City Hall.
The City Council will be voting on 2nd reading to ban EScooters from all City Parks as well as the Northern and Southern Waterfront Walkways (the areas where there are adjacent bike/multi use lanes where EScooters can and should be ridden).  If you can’t make in person, you can watch live on Facebook or online.  You would think this is an easy law to get behind – given EScooters and kids don’t mix well – but because of the upcoming elections/political environment, I have less confidence that this is the slam dunk it should be.  So write your council person, come to the meeting, and let us know your views – whatever they are – on this.  I understand Ojo’s CEO will be at the meeting, and as of this writing, our neighbor who was in the accident described above plans to attend as well.
Back to the update on EScooters….
MY POSITION ON E-SCOOTERS
Let me start by saying that my position continues to be informed by the feedback I get from many of you.  I believe:
All this said, it sounds like I want to kill the E-Scooter program permanently.  And I don’t…not yet.  I think we need to continue with safety improvements – like Wednesday’s vote – during this pilot, but we take the winter off to work on what we need to see happen in order to potentially launch again in the spring.  Last time the goal of the administration was to be “first” with a program in NJ.  I think a better goal is to have a program that is “right” for Hoboken (or not have anything).
STEPS IN THE RIGHT DIRECTION
The City Council approved a contract for a consultant to do a benchmark study for E-Scooter programs.  This will look at 10 cities around the globe to identify best practices.  The obvious question is why this wasn’t done before we rolled out this program… I digress.  But I sat with Director Sharp on Friday for over an hour reviewing the scope of the study and discussing considerations that we want the study to address.  Some of what we discussed was:
I am very much looking forward to the results of this study and am grateful that Director Sharp let me provide some input.  Additionally, as part of the study, the City will be putting out a survey to collect input.  This will not be just a yes or no survey but rather an expanded one that will get better information on the program and its future – assuming all of you fill it out!
The City has / is about to hire two additional HPU enforcement officers who will be 100% dedicated to enforcing the E-Scooters.  The additional money from the recent contract amendment that I advocated for is going to fund these two positions.
Improved E-Scooters are hitting our roads.  Lime has rolled out new Lime 3.0 EScooters that they are touting as being safer: “The 3.0 includes front dual-suspension, larger 10″ tires, front and rear brakes, and an overall more-durable frame.”  Ojo, the day their contract was terminated, were about to roll out their new EScooter as well which had many of the technology upgrades that Mayor Bhalla indicated in his press statement that the old Ojo’s did not have.  They are in Hoboken this week doing demonstrations.
WHAT DO YOU THINK?
At every door I have knocked and every conversation I have had with neighbors, the topic of E-Scooters has come up and all have strong opinions.    So far, the overwhelming majority are concerned, but most see the mobility benefits.  A few are completely against.  And a small minority are all for them and think the safety concerns will work themselves out over time.  Here are a few interesting responses that I heard recently that either I was surprised by, or raised something I hadn’t thought about previously:
WE HAVE LEVERAGE HERE
Lime has indicted that Hoboken has the highest ridership in any of their global markets.  If our market is that attractive then we should put out an RFP with all of our demands and we WILL get the best contract.  Ask the right questions, get the best answers.

This is a complicated issue for many reasons not the least of which is the strong community interest in the additional mobility coupled with the lack of sufficient resources to enforce.  Any rhetoric you hear about “zero tolerance” is just lip service.  We need leadership on this and less words and more actions.  I have been working since the failed rollout to find ways to improve safety including getting the E-Scooter companies to require ID, adding penalties into our code for reckless riding, reducing the speed limit on the waterfront to 8mph, increasing economics to the City from $12,500 to over $100K so we can be better compensated for the enforcement burden, and now sponsoring legislation to ban them from our parks and busy areas on our waterfront.  It’s actually hard to believe that none of this was in place when the program rolled out in May.
Next up?  Making the E-Scooter companies financially liable for reckless and irresponsible riding.  If we hit their pocket quickly, they will hit their rider’s pocket quickly through their app to recoup, and just like people avoid getting parking tickets when enforcement exists, rider’s behaviors will then hopefully more quickly change.  It’s all about enforcement.

As always, please forward to anyone you think may be interested in this (which is everyone).  And feel free to email me at hoboken2nd@gmail.com or call me at 201/208-1674 to discuss what you have read or anything else that is important to you.  If you are interested in donating to my campaign you can do so online HERE.  Thank you again for this amazing opportunity to serve you and for your support.  I will continue to work hard, every day, to earn your vote on November 5th.
I hope to see all of you tomorrow night at 7pm at the Council meeting to talk EScooters!