Dear neighbors, family, and friends,
Happy Friday and Happy 25th Anniversary to me – on this date 25 years today, I moved to Hoboken!  What an incredible adventure it has been since then when at 26, I lived in a 4th floor walk-up on Monroe St. between 1st and Newark and worked a zillion hours a week at an Investment Bank in New York.  And now, at the age of 51, with a few more gray hairs and still working many hours per week only now for Hoboken, I wiIl be hosting a Campaign Kick-off Event for re-election to a second term on Hoboken’s City Council as the 2nd Ward representative.  Please RSVP here (FB event) or email me. 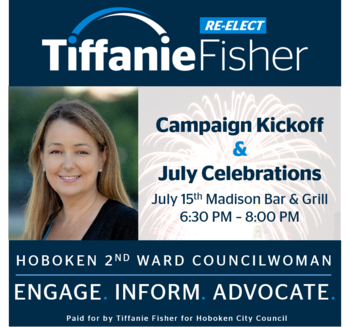 Whether you live in the 2nd Ward or elsewhere, please come out on what looks to be a gorgeous summer evening to help me celebrate these milestones.  Drinks and snacks are on me including my single favorite summertime drink – Pimm’s and Lemonade.  And I have a special guest who will be introducing me that night… J
Nominating Petitions
As you probably know, in order to get on the ballot, I need to have nominating petitions signed by 1% of the registered voters in the 2nd Ward.  Last time it required 63 but I was able to get almost 300.  And this time the 2nd Ward grew so much I need 75!  If you are a registered voter in the 2nd ward (click HERE to see boundaries), I would be so honored to have a nominating petition from you – it just requires a signature and an address. 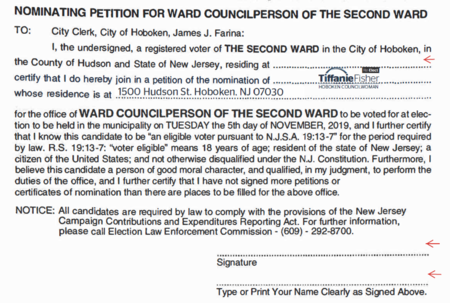 As always, please forward to anyone you think may be interested in this.  And don’t hesitate to email me or call at 201/208-1674 to discuss this or anything else important to you.  Thank you for reading and I hope to see you Monday night at 630 at the Madison Bar and Grill for my Kick-Off event!