Beth Mason says, ‘Don’t blame me, my consultants insist I hug it out with the mayor’

Councilwoman Beth Mason is in a helleva bind.  She ran a push poll some weeks back all over town attempting to poison the political atmosphere for her political opponents while collecting data for her own use and upcoming 2nd ward council race against challenger Tom Greaney.

The results must have given her agita for a good many nights as she received the same conclusion as another widespread poll earlier was rumored to learn – Mayor Zimmer’s efforts are being noticed and Hoboken people like what they see.  The data must be similar showing a large gap of the mayor’s favorable ratings to those unfavorable in the range of the not insignificant area of 20%.  As a result, Beth Mason’s website is now updated to show this: 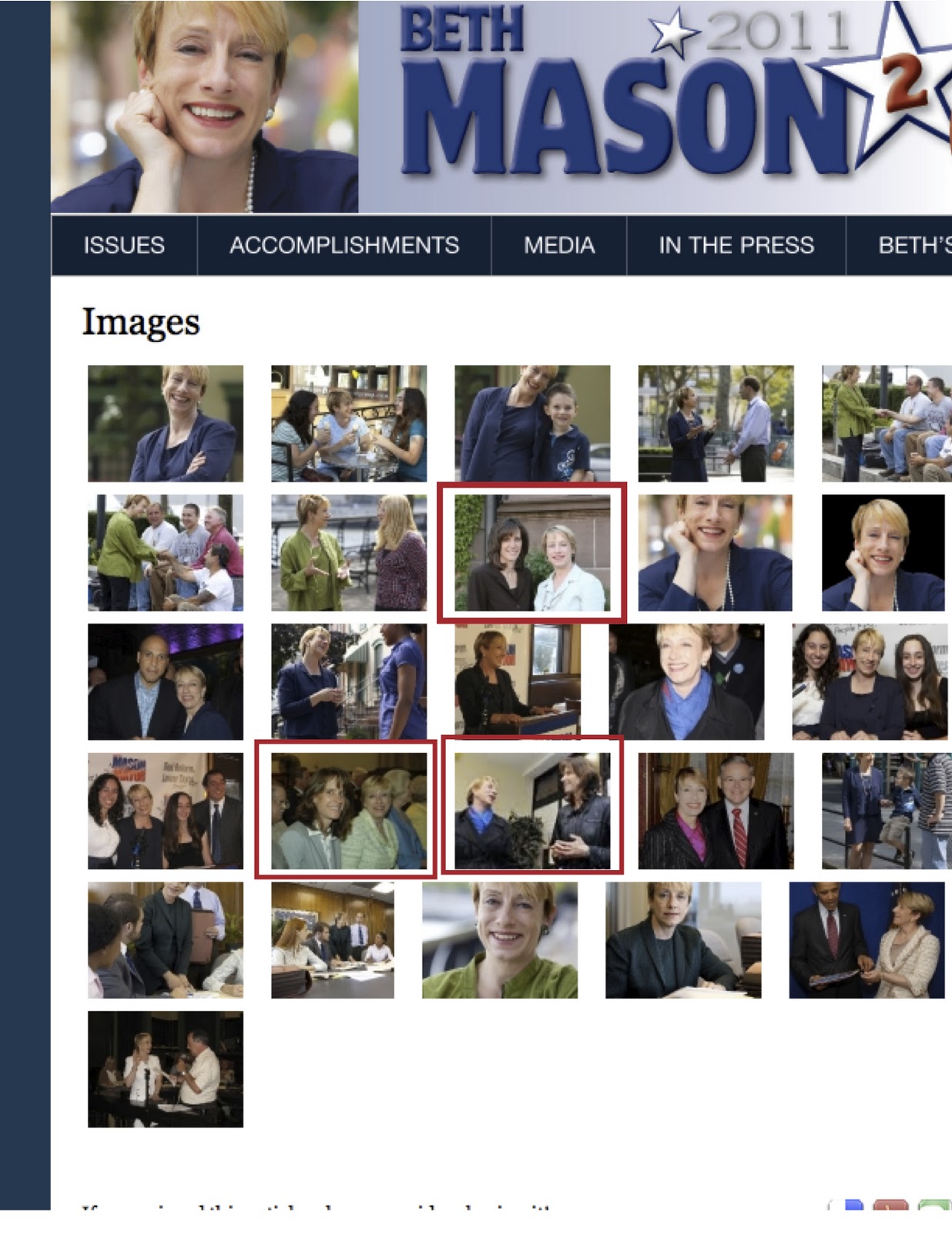 Notice the pictures highlighted in red.  Councilwoman Beth Mason who has on the whole opposed and sometimes virulently so any measure proposed by the mayor is now trying to convince voters they’re BFF.  Look above and you’ll see dated pictures back in the day when Beth Mason was part of the reform movement.  You’ll have to take MSV’s word the pictures are old because there’s nothing recent of note showing them all happy faced together.

Instead of working as part of a positive group in City Council to advance Hoboken’s best interests, Beth Mason chose to embrace the Old Guard elements and worst of all the Russo family and their infamous appetite for sucking on the taxpayer monies in any and every shape possible. Whether it meant backing a pilot for Church Towers with no income means testing or undermining the Hertz Connect Corner Cars program, Mason went all in to undermine the mayor’s agenda.  Nary a word from her on the latest Russo $100,000 ripoff of taxpayers either.  (But she did join in a vindictive vote to have Director Ian Sacs pay a $1,000 transportation bill after the fact.  The cost had been approved in advance for a professional development conference held this time in Vancouver.  That retroactive bill paying measure failed Beth and the Russo family member votes came up short.)

Now with the clarity of the mayor’s favorable ratings known on both sides of the political aisle, Beth Mason finds herself attempting to convince the public she’s just another supporter “working with” the mayor instead of fighting to undermine good policy presented by the Administration at every turn.

Must be galling to deploy that strategy but if it achieves the ends of today, Mason has decided it’s the lesser of two evils.  Losing yet another election, this one for the 2nd ward council seat is the death knell to her larger political ambitions.  She has little use for the 2nd ward council seat other than to advance herself for higher office.  An insider declared their surprise when she openly voiced just that sentiment back in her earlier mayoral run.

But that doesn’t come as much of a surprise to many readers.  They know the game having seen Beth Mason in action since the last mayoral election.  Hopes she would see the light and “come home,” have never materialized.

They never will either.  Get used to it as any close observer will tell you, it’s going this way right into the May council elections.  The Hoboken electorate will decide Beth Mason’s political future in this town and it’s for all the marbles.

How much do the marbles cost?  Well some Hoboken voters just refuse to be bought at any price.  Soon, we’re going to all find out what that means in the city council ward elections.